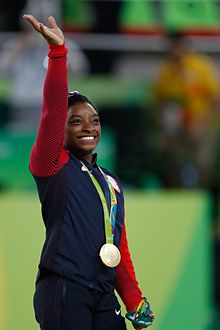 Simone Biles, The GOAT, a Role Model for All

Simone is most known for winning 25 World Championship and 7 Olympic Games medals; however, she is a role model for African American gymnasts and an inspiration for those struggling with mental health.

Simone Biles was born on March 14, 1997 in Columbus, Ohio. After being in foster care for a few years, Simone was adopted by her grandfather. She was raised in Spring, Texas by her grandfather and his second wife. After realizing her passion and success in gymnastics, she switched from public school to homeschool, which allowed her to increase her training. In 2014, she verbally committed to UCLA for gymnastics.

As her success grew, so did her name. She began outscoring Olympic medalist’s Gabby Douglas, Maggie Nichols, and Aly Raisman. At the World Championships in 2015, Biles became the first woman to win three consecutive all-around titles in World Gymnastics Championship History.

In 2016, she was named to the team for the 2016 Rio Summer Olympics, with Gabby Douglas, Laurie Hernandew; Madison Kocian, and Aly Raisman. With her help, Team USA won the gold, and she individually qualified as the top gymnast into four of the five individual finals. She left the Games with four Olympic gold medals, setting the record for the most gold medals in women’s gymnastics at a single Games. Biles, along with her teammate, Gabby Douglas, the first American to claim gold medals in the team and individual all-around events and the first African American to win the all-around title, are the only American female gymnasts to win both the individual all-around gold and team gold at the same Olympiad. Simone actually states that it’s because of Douglas, an African American gymnast, that she was so inspired to succeed.

“Growing up, I didn’t see very many Black gymnasts… So whenever I did, I felt really inspired to go out there and want to be as good as them. I remember watching Gabby Douglas win the 2012 Olympics, and I was like, If she can do it, I can do it.”

Like many other young, African American female gymnasts, Simone just wanted to see people that looked like her were at the top. “I think it’s nice to see so many people at the top that are people of color because it gives you inspiration, motivation. But also in the gym, I think representation matters. Whenever you’re younger and you see somebody that looks just like you, you’re like, ‘Wow, they’re doing it. Then I can do it, too.’” She became an inspiration for young African American gymnasts and athletes. Her success has shown others that it has nothing to do with the color of your skin.

“I wanted them to know that following your dreams — not just in gymnastics, but in everything — shouldn’t have anything to do with the color of your skin. It should only be about finding the discipline and the courage to do the hard work.”

In 2021, Biles was named one of Time magazine’s most influential people of 2021. At that same time, she was speaking out against a system of justice, testifying before Congress about how the U.S. justice system failed to stop former USA Gymnastics doctor Larry Nassar from sexually abusing her and others.

Through the horrific event, she made it clear that she wanted to be the voice for others, so they did not suffer as she did. “I don’t want another young gymnast, Olympic athlete or any individual to experience the horror that I and hundreds of others have endured, before, during and continuing to this day in the wake of the Larry Nassar abuse,” she said.

The 2021 Tokyo Olympic games happened after the release of this case. Biles, still suffering from the after effects of the abuse, withdrew from many events at the games to focus on her mental health. She still won a browe medal on the beam. By putting her mental health and safety first, she inspired others. She showed that athletes accomplishments and others accomplishments don’t define us as humans. It’s what we stand for, it’s what we are passionate about, it’s what we speak up for. She is one of the first world renowned athletes to publicly prioritize mental health over competition. Although her medal count is inspiring, everything she did outside of competition is what truly inspires us to fight for those who can’t, speak up and share our stories, and empower others to do the same.

“I have to put my pride aside. I have to do what’s right for me and focus on my mental health and not jeopardize my health and well-being.”

She is an outspoken proponent of women’s rights both on and off the mat. One of the most valuable lessons we can learn from Biles is that it’s okay not to be okay. She exemplifies courage and is an inspiration for all to stand up for themselves and take a step back if needed.

“I thought I could figure it out on my own, but that’s sometimes not the case. And that’s not something you should feel guilty or ashamed of.”