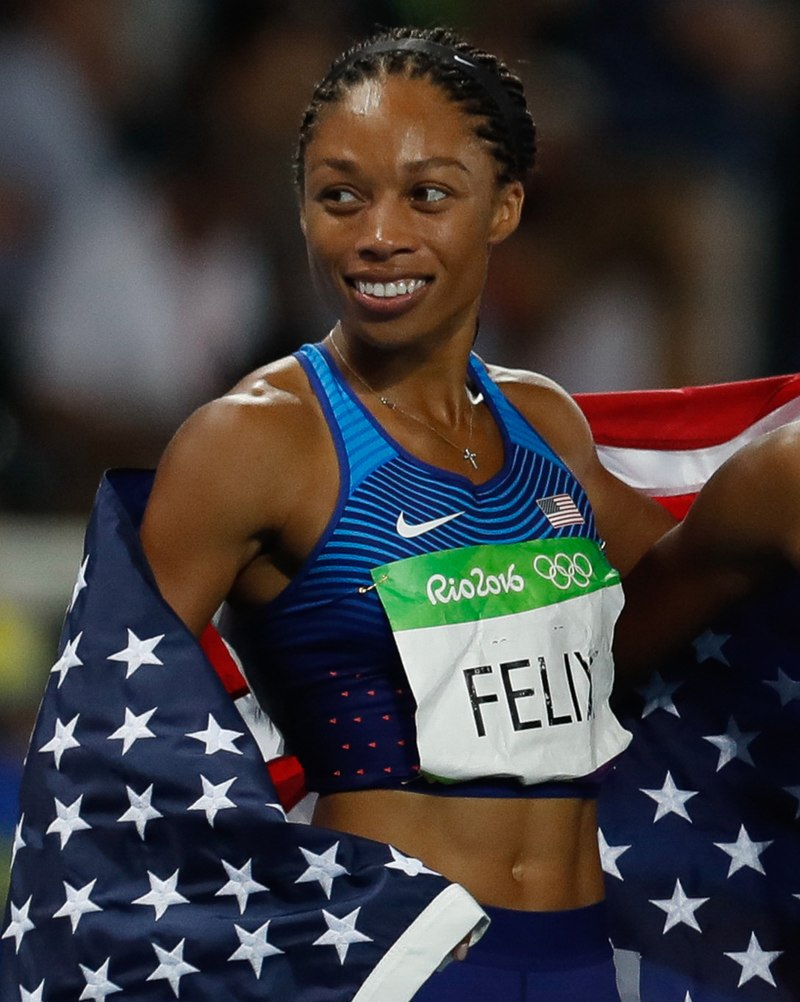 Allyson Felix is an American track and field athlete and notably the most successful athlete in history in major competitions. She is known for speaking out against Nike and its policy for women returning to sport after pregnancy and continues to empower women in sports.

“The only way we’ll see real change is if we all learn to raise our voices and ask for what we need.”

Allyson Felix was born on November 18, 1985 in Los Angeles, California. Her career started at age 14 in high school when she entered North Hills Baptist High School in Los Angeles. Not long after, she became the 100m World Youth Champion. She continued to develop and excel in track and field, and in 2004, she competed in the Athens Olympic Games. She won the silver medal in the 200m, and set a new junior world record.

As her career continued, she competed in every summer Olympic games starting her first in the Athens Olympics in 2004 through the Tokyo Olympics in 2021.She became the record holder of eleven Olympic podiums in women’s athletics, which regardless of her gender, places her behind Paavo Numi’s twelve medals. She is regarded as the most decorated athlete in history with eighteen major gold medals.

In 2019, after giving birth to her daughter, she criticized Nike, her former equipment manufacturer, when it pressured her to return to competition as soon as possible. Nike also reduced her resigning contract by 70%. Allyson deemed this unacceptable. “It’s one of the examples of a sports industry where the rules are still mainly made by and for men.” Not long after Allyson spoke out against Nike, it changed its policy to guarantee that pregnant athlete’s pay cannot be cut for 18 months. Felix did not renew her contract with Nike. Instead, she signed with Athleta, a company who is committed to empowering female athletes everywhere. She now advocates for child-care help for mothers as they train and compete for the Olympics.

Known as the greatest sprinter of all time by many, she retired from the sport in June of 2022. She continues to advocate for child-care help for mothers as they train and compete for the Olympics. In partnership with Athleta and Mother, she created a fund that offers free childcare for athletes, coaches; and other staff members during the Worlds. “It’s really hard to balance being a mom and a professional athlete, and the reality is that there’s a certain level of financial support and security that’s necessary to be able to do it.” Through this fund, she hopes to continue empowering female athletes to chase after their dreams.

“When I think about the world that Cammy will grow up in, I don’t want her – or any other woman or girl – to have to fight the battles that I fought”