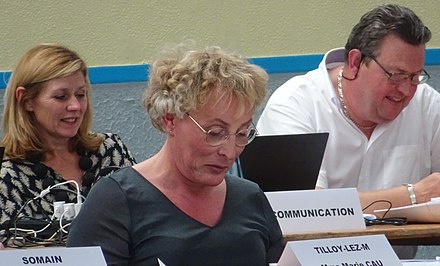 After living in her town of Tilloy-Lez-Marchiennes for 20 years with her three kids she decided that it was time for her to do more for her community.

Not an activist but still sending a message

“I don’t want to be an activist, but now as an individual it’s always nice to hear that you’re a very good person when you’ve been hiding all your life. It makes your heart feel good. I don’t want to be selfish and not carry a message”

Marie was born in Roubaix, France in 1965. She studied IT, went to the army, became an engineer then created her own company in order to work as an IT consultant.

She stated during an interview that she is not a militant, she ran for mayor ship to protect and develop her town.

Her community has elected her (by 73,1%) on may 23rd of 2020 for her program not her gender or identity. It is quite interesting to see what happen when things get normalized and people stop pointing at your difference. She advocates a model based on sustainable development, local economy, short circuit and social responsibility.

She believes that by normalizing and communicating openly on her transition but more importantly on her program, maybe one day a trans elected won’t be an event anymore.

Paradoxically, not being an activist or wanting to normalize these behaviors she represents a perfect example of a modern world where people in spite of their sexuality, identity and gender are appreciated for who they are and how they act.

“People mobilized on broad directions, on a unifying speech. I composed a mixed team of men and women with different generations to create a community. The words: competence and benevolence sum up our orientation. Nothing was related to my person, I was just a catalyst for a desire in the village to make things happen. What I am was secondary”.

It is still important to say that other trans people might have been elected before but probably without announcing it publicly as she did.